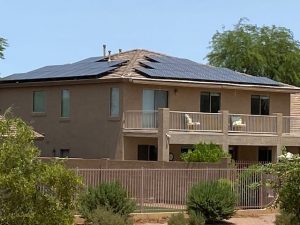 The transition from being bound to our fossil fuel dependent utility began quite by accident.  Once the process to power our home renewably started, the plan to do the same with our cars followed (more on that in Part 2).

The technology company I was working for in 2010 made an offer to all employees.  If we were to purchase a SunPower solar system installed on our home rooftop my employer would donate $2,000 toward the purchase of that system.

We had never considered investing in rooftop solar but because of the generous offer we decided there was no harm in looking into it.  On New Year’s Day, 2010 we were sitting in our family room speaking with Solar Integrator Jamie Stoutenburg from Sun Valley Solar Solutions.  He showed us that we could cover half of our summertime utility bill with a 5.6 kWh system mounted on the south facing roof surface of our home and that the ROI would be less than 10 years.

We were shocked!  We could halve our $350 utility bill for something that would be paid off 10 years before we retired?  It was a no-brainer and we were on our way.

Two years later we put the same size system on our western facing roof.  We now have 42 solar panels spread across our rooftop that provides 11.4 kWhs of power.  That was enough to almost completely eliminate our utility bill.  Our home starts to produce power as soon as the sun rises from the southern facing surface.  The western facing surface kicks in around 9:00 AM, with both systems producing power until sunset.

Our average June through September 2019 bills were $62.  During February, March and April we paid the minimal connection fee of $21.56.  On a recent analysis, the way the averages worked out for the year, we paid an average monthly utility bill of $44 during 2019.

Our first system realized its ROI by mid-2019. But the second system cost more because of solar incentives coming down in Arizona.  The second system also did not include the $2000 rebate from my company, so the ROI projection is by mid-2022.

In early 2015 our utility instituted demand fees on anyone seeking to install new solar on their homes.  Because of protest from solar adopters, the utility agreed to 20-year grandfather status for existing solar customers only.  All new installs were forced into the new costly rate plan – a disincentive for going solar that sadly succeeded.  In 2014, 6,000 Arizonans installed solar in SRP territories.  In 2015, that number dropped to just a few specifically because of the demand fee!  It has stayed that way ever since — in the sunniest state in the nation!

By installing and paying for our solar systems when we were working we took care of the cost to power our home on an ongoing basis, up front, when we were working.  This made good sense to us, as utility rates increase 3% annually on average.  Now our energy costs are minimal — and fixed for our retirement years when our income is fixed.  No more ever increasing energy bills from the utility!

For people who have to mitigate the demand fees to install new solar now, fixed energy costs are now available to them too, thanks to batteries and/or load balancers.

At some time in the future, we will be looking at integrating batteries or load balancers to our existing systems, if and when they are needed.  For now, under our grandfathering agreement, our energy costs are stable, thanks to the sun!

Fossil fuel companies are in a race against technology.  How do you think that’s going to work out for them?  Not well, I can assure you. 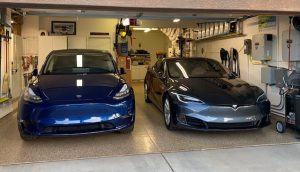 –       I will cover how our home powers the homes around us

–       How micro-grids will start to appear all over the world

o   Arizona has amazing potential to lead on this one!

–       How we began our transition away from ever buying gas or oil for our cars again,

Ken & his wife Karen live in Gilbert, AZ.  They consider themselves “first adopters.”  Almost 20 years ago the couple set out to wean themselves from fossil fuel dependence.  Between owning 2 Teslas and 42 solar panels, with an eye on battery storage, Ken & Karen are on their way.